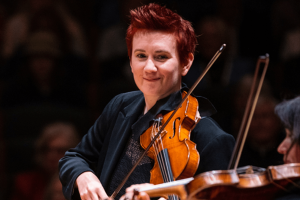 accentus is a professional choir, founded more than 20 years ago by current artistic director Laurence Equilbey. The choir is dedicated to the performance of the major a cappella works as well as to contemporary repertoire.

accentus enjoys an important residence at Opéra de Rouen Normandie where it regularly performs in concert as well as in opera productions as the chorus. The ensemble is also privileged to be a partner with the Philharmonie de Paris. Since 2009, accentus has an ongoing collaboration with Orchestre de chambre de Paris. Christophe Grapperon is associate conductor of the choir since 2013.

accentus records for naïve. All its recordings have received wide critical acclaim. The CD “Transcriptions” (with sales of over 130,000) was a 2004 Grammy Award nominee in addition to receiving a Disque d’or in 2008. Mozart’s Requiem was released in September 2014 with Insula orchestra, and Félicien David’s Le Désert and Rossini’s Petite Messe Solennelle with Orchestre de chambre de Paris in January 2015. The latest disk – “Mantovani voices” – was released in June 2015. For September 2015 the choir plans the release of Gluck’s Orfeo and Euridice with Franco Fagioli (Deutsche Grammophon – Archiv Produktion).

erda | accentus receives aid from the Direction Régionale des Affaires Culturelles d’Île-de-France of the French Ministry of Culture and Communication, is subsidised by the City of Paris and the Île-de-France Region, and also receives support from SACEM. accentus is in residence at the Opéra de Rouen Normandie. Concerts and cultural activities in the Department receive the support of Conseil Départemental des Hauts-de-Seine. The cercle des mécènes d’accentus specifically supports the ensemble’s artistic development.